A couple of days ago Bert posted a viral called ‘Megawoosh’. First of all he thought it was a viral for ‘Projectbuero Kammerl’. They’ve built the most unusual waterslide in the world, and Bruno Kammerl was looking for investors to expand the Megaswoosh project. Check the video below where he explains the philosophy behind his projects.

The video became an enormous succes on the internet, since the launch on the 3d of August the video has already been watched 1,4 million times according to viraltracker. That’s an amazing result. On August 8th it was viewed 275000 times. Today views are starting to decrease, but it’s still doing good!

Offcourse everybody started to realize there is something fishy about this project. Like Bert said: “real or not, I can’t tell”. Some days later everybody concluded this video was a FAKE!

But who made it? Where’s the company who can take credit for this one?

On August 6th the official Megawoosh website changed…. and on top of the website we could all see this logo:

This video is actually an ad for Microsoft Office Project 2007. That’s a pretty funny catch, don’t you think?

The last years I’ve heard a lot of people screaming on their blogs and websites that viral doesn’t work anymore. Well I think Microsoft proved them wrong. Hopefully though they wil keep it with this good one, and don’t screw it with a series of bad virals. 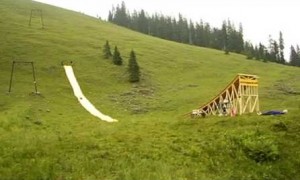 UPDATE : I was wrong! (Can you imagine?) Apparently there is an agency who supported Bruno Kammerl’s idea.. Thanks ‘ph’!