HBO and BBDO developed an amazing campaign lately called: “It’s more than you imagine”. In New York, Philadelphia and Washington D.C. they placed a 14 foot Cube on the streets where on 4 sides of the cubes, a story could be sen. It was the same story, but in an other angle, which made the story more interesting as you only see it on one side.
Check out their site HBO campaign to view the two stories. This campaign won Silver on the Cannes Lions awards. 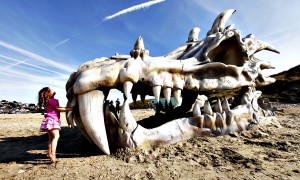 Cool stunt by HBO for their series Games of Thrones where they installed a giant dragon skull on the Charmouth Beach, Dorset, UK.

Everyone who ever watched television together with their parents will know the awkward situations depicted in these seven great commercials for HBO. For all the children in these spots it might be time to subscribe to get HBO GO.