As part of a 360 campaign entitled ‘At home with the stars’, BBR Saatchi & Saatchi Tel Aviv created a 140 meter (460 feet) long magnetic billboard, onto which it attached over 6,000 cut-outs of entertainment celebrities that the public was invited to peel off and take home with them.

This resulted in that the entire display was stripped bare within 2 hours of launch, and was consequently restocked several times.

This campaign was made for HOT, a television network, to promote their show and stars to its customers. 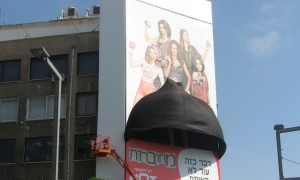 BBR Saatchi & Saatchi Tel Aviv have applied to the Guinness Book of Records for having created the world’s largest dress. The 100 square meter garment appears on a huge billboard in Tel Aviv, part of a campaign for a new fly-on-the-wall documentary s 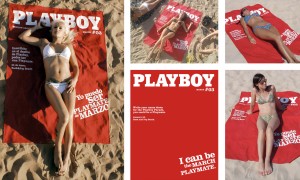 Playboy: Every girl can be a Playboy bunny

This clever idea can make every girl look like she is on the cover of Playboy. Just lay down on the towel and it looks like she is the March centerfold.

Playboy : Every girl can be a Playboy bunny
19