To the average Aussie a 5 cent piece is seen as almost useless. Some of us would even go as far as to say the 5c piece is becoming more of a hassle to carry around than to have as a valuable piece of currency. But crucially,to a child in a far off land, that same 5 cent piece is immensely powerful, and has the ability to supply clean drinking water for two days.

5 Fund is a national campaign designed to inspire a nation to turn something that they think is practically useless, the 5c piece, into the most powerful coin in the world.

The campaign ran through print, digital and onboard every single Qantas flight to inspire Australian's to part with the useless change. Other touch points included onboard envelopes and a complete overhaul of their collection points in every domestic terminal. 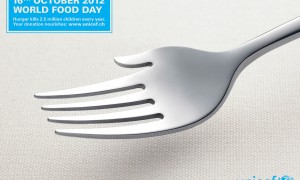 This print advertisement was made fo the world food day by Unicef. The tagline that goes along: “16TH October 2012 World Food Day. Hunger kills 2.5 million children every year. Your donation nourishes: www.unicef.ch”