The TV commercial was designed to hijack viewers' Google Home device by saying “OK, Google” and asking about the Whopper of Burger King. The device then started to look for the Wikipedia-result, but people soon began to change the Wikipedia-page from the Whopper, saying stuff like "made with 100% medium-sized child" and "topped with sliced tomatoes, onions, lettuce, cyanide, pickles". 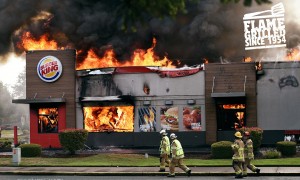