Strange campaign from Burger King, Norway. They had 38.000 fans on Facebook but amongst them there were a lot of ‘trolls’, people that were only fan because of the free stuff Burger King gave away. So the fast-food chain wanted to slim down their Facebook-fans to only the real loyal ones. So they decided to ban some people from the page by giving them a choice. Stay a fan, or get a free burger. 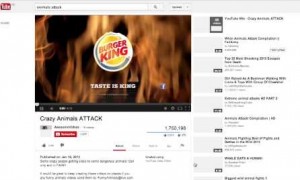 Everyone in the world hates these annoying Youtube prerolls. So how make them more interesting for people? Just make about 64 versions they figured, and we have to admit they are fun to watch.