This is the new print campaign for Volkswagen Classical Parts, and as you can see it’s an almost identical copy of the 1950 ‘Think small’ campaign.

The cool thing they’ve done with this new campaign is altering the text on the bottom.

Take a look at the original body:
18 New York University students have gotten into a sun-roof VW; a tight fit. The Volkswagen is sensibly sized for a family. Mother, Father, and three growing kids suit it nicely. In economy runs, the VW averages close to 50 miles per gallon. You won’t do near that; after all, professional drivers have canny trade secrets. (Want to know some? Write VW, Box #65, Englewood, N. J.) Use regular gas and forget about oil between changes. The VW is 4 feet shorter than a conventional car (yet has as much leg room up front). While other cars are doomed to roam the crowded streets, you park in tiny places. VW spare parts are inexpensive. A new front fender (at an authorized VW dealer) is $21.75.* A cylinder head, $19.95.* The nice thing is, they’re seldom needed. A new Volkswagen sedan is $1,565.* Other than a radio and side view mirror, that includes everything you’ll really need. In 1959 about 120,000 Americans thought small and bought VWs.
Think about it.

In this campaign the tekst says this:
Our little car isn’t so much of a novelty any more. A couple of college kids don’t try to squeeze inside it. the guy at the gas station doesn’t ask where the gas goes. Nobody even stares at our shape. In fact, some people who drive our little flivver don’t even think 32 miles to the gallon is going any great guns. Or using five pints of oil instead of five quarts. Or never needing anti-freeze. Or racking up 40,000 miles on a set of tires. That’s because once you get used to some of our economies, you don’t even think about them any more. Except when you squeeze into a small parking spot. Or renew your small insurance. Or pay a small repair bill. Or trade in your old VW for a new one.
Think it over.

You have to admit, this is some genious copywriting. 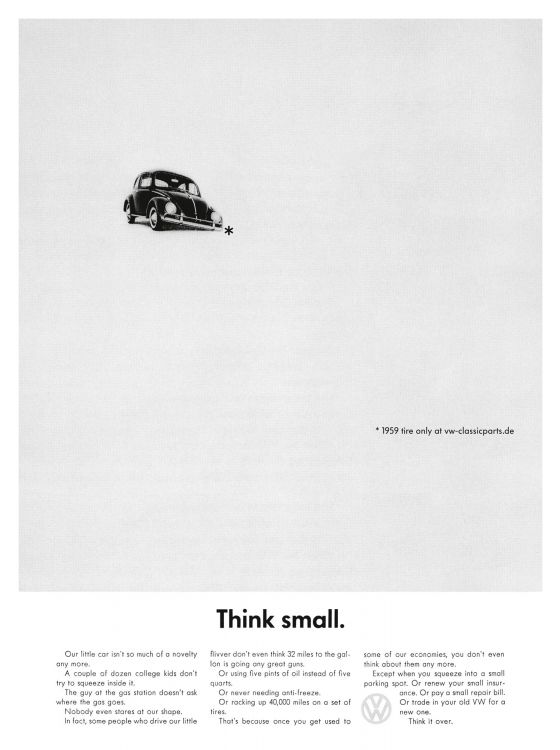 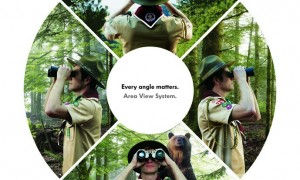 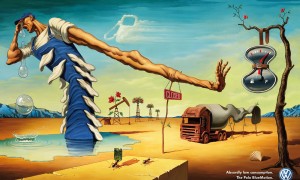 DDB Berlin has altered some world famous paintings. They used works of Dali, Bosh and Magritte. They kept the artists’ specific style but changed the theme to the new Polo BlueMotion. This Polo Bluemotion has an ‘absurdly low consumption&#8217