The newest commercial from Bono from ONE.org, an organization fighting the famine in the eastern part of Africa , will not be broadcasted in the United Kingdom. Clearcast, the NGO which pre-approves most British television advertising, has stated that the commercial contains political propaganda. The commercial features stars like George Clooney, Kristin Davis, Annie Lennox and even the mayor of New York Michael Bloomberg. 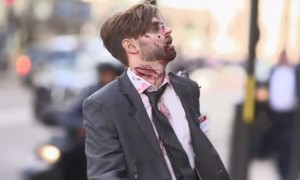 Colin Farrell gets some help from a zombie to explain how a trillion Dollars is being siphoned out of developing countries every single year.