Chisulo is an African elephant born near the Ngorongoro Crater (Tanzania). Chisulo was the only son of Watende, the leader of the herd and Inaya. From whenever he was born Chisulo supposed to step into the footsteps of his beloved father. Watende tought him everything he knew and at the age of 14 Chisulo seemed ready to take lead. That was until poachers disturbed their harmonious life.

The poachers set foot on the ground belonging Watende’s herd, with only one goal: to collect ivory. Watende tried to protect his family but harm was done from the moment they set foot. The elephants were outnumbered by the enemies and couldn’t force a thing. Some of the herd got away, some of them lost their lives.
Chisulo was lucky. As he was one of the strongest elephants of his herd (Chisulo means “strong as steel”, a name he didn’t stole), the hunters had other plans with him. They took away his tusks. But the anesthetics given to him for the long trip were not strong enough. After a fierce battle he managed to escape and totally disorientated Chisulo tried to find his herd. Unfortunately, he never saw any of them again.

After weeks of wandering around, lumberjacks in Kenya found the weakened animal and took care of him. They could use Chisulo to move heavy tree trunks. They adopted him an treated him like a friend. But after a year, a cruel civil war broke out in Kenya. Organizations collapsed and many people lost their life in combat, including his owners. At that moment Chisulo decided enough harm was done to him and he decided to take control and fight for the weak.

One day, in search for food he passed a deserted village which was entirely destroyed by the rebels. Under some fragments he found a rocket launcher belonging to the rebels. He started to practice and became an expert in launching rockets.

Years later he turned up in South Africa where he fought the rebels. At that time Rönguðr, Kaua and Bossies were on a mission in Botswana. From locals they’ve heard all kinds of stories about this strong elephant helping locals to drive out rebels. The team decided to search him and hoped to convince him to join the team. Chisulo didn’t agree immediately, but not long after all rebels were gone, he followed his new team to fight crime. 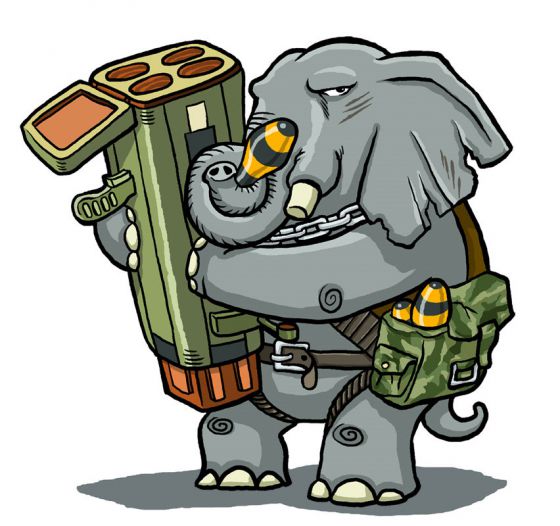