International Kissing Day takes place on the 6th of July every year. Kissing Day aims to make us appreciate a kiss in its own right.   No conventions, no social norms, just a kiss. Across the globe we embrace the kiss by embracing someone else.

Creative Criminals selected the 10 best kiss-commercials. Some of them you'll probably know, others will be a pleasant surprise for you. From the first kiss, to the unexpected kiss, ending with the best gross kiss.

You probably seen this one before. The video went immediately viral the first week reaching over 85 million people. At first people taught the video was made for no reason, but afterwards it became clear that a clothing line named Wren, was the brand behind it. (Director: Tatia Pllieva)

When Bar Rafaeli meets a geek, and kisses him. Wanting to be in his shoes, but on the other hand, it makes you feel uncomfortable. GoDaddy commercial for the Super Bowl in 2013 got lots of media attention. Bull's eye!

Axe latest commercial, named 'Make love, not war', was made by BBH, London and was a true masterpiece, because of its different stories and surprising plot. (Agency: BBH London, United Kingdom)

Probably never seen this one before. It is a commercial for DHL, South Korea and is about a normal, delivery guy. Check out what can happen if you are delivering a simple package. (Agency: Diamond Ogilvy Seoul, South Korea)

A metro station in Hyde park, Sydney was once been transformed into a beautiful bistro. They’ve came up with a new payment method, where you could pay your coffee with a kiss. By simply giving a kiss to a beloved you got a free cup. (Agency: Lavender Sydney, Australia)

One of the funniest animation commercials we've ever seen. A baby prepares himself for a fight with his father, to get the most kisses from the mother. Epic commercial from Wilkinson. (Agency: JWT Paris, France)

This commercial got banned on American television screens for being too provocative. Made for Jawbone, a consumer electronics store, it features two male rugby players suddenly kissing. And not a sweet kiss, a monstrous kiss. (Agency: MacGowan Spencer Los Angeles USA)

Lovehoney's 'Live A Sexier Life' commercial was Britain's first ever TV advertisement for a sex toy company to air on daytime TV. Focusing on a couple locked in a passionate embrace, it barely scatches the surface of naughtier ads to follow. (Agency: Halo Media Bristol, United Kingdom)

This elderly couple proves they still have that loving feeling. This passionate moment has been brought to you by Best Worst Movie – the true story behind the worst movie ever made, Troll 2. (Agency: Birthplace Toronto, Canada) 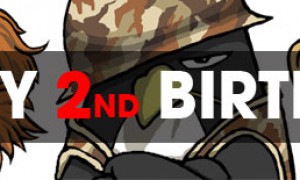 Today we celebrate CreativeCrimnals.com’s 2nd birthday! Since the beginning in 2009, we’ve posted over 1900 of the best and most creative advertising campaigns from all over the world. The last 12 months were very important for our blog, on January 9th we