On January 8, Tropicana brought sunlight to Canadian city Inuvik, Northwest Territories which doesn’t have any sun for several months. A helium balloon producing over 100,000 lumens was hanging above the town.

The event has been turned into a campaign, entitled Brighter Mornings or Brighter Days, which was launch after the Olympic closing ceremonies last Sunday. The campaign launched its new brand Tropicana Essentials Orange Juice. 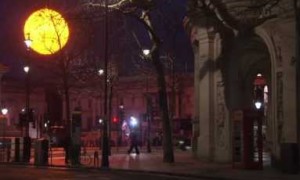 Remarkable stunt from Tropicana. Today at 6.51 a fake sun was lit at Trafalgar Square as part of the Tropicana’s Brighter Mornings campaign. The sun is 30,000 times bigger than a football, has a surface area of 200m2 and weighs over 2,500kgs. Its in 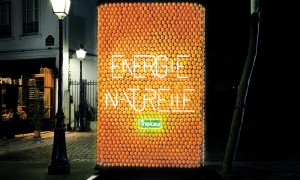 Advertising agency DDB (France) created a billboard that harnesses the energy from oranges to illuminate a neon sign that reads “Natural Energy” & the Tropicana logo. Through several thousand spikes of copper and zink, a lot of wiring and