During the Tunisian revolution earlier this year, the regime of authoritarian President Zine El Abidine Ben Ali got overthrown. Last week a giant poster of Ben Ali appeared in Tunis. Obviously this triggered an aggressive reaction of the by passers. When the billboard got torn down by an angry crowd a new message appeared, encouraging people to vote. A very clever play on the target group. ASSS is a health organization in Canada. To raise intrest in pursuing a career in public health they’ve made, together with their agency Ig2 this interactive abri-bus billboard. When people would enter the bus-stop, they would hear a constant no 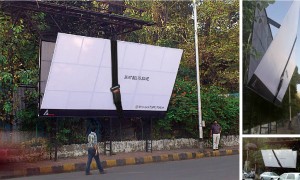 Well apparently seat belts don’t only save people’s lives in a car. This giant billboard started to tilt over but was held back with a giant seatbelt. What a fun and simple way to convey the message.