Philips announced a sequel to the stunning project last year, called Carousel . The new campaign is called Parallel Lines and invites five directors of the Association Ridley Scott to run five different short films. The short films are launched in preview on the 7th of April through the Facebook page of Phillips. When all the videos are uploaded, be sure that you will find them back on Creativecriminals.com!

Over 73% of Taiwanese men think that grooming is just about cleanness, preferring a clean-shaven look over any type of beard and stubbles. In order to increase penetration of Philips grooming kits, Philips created the “Low-tech Augmented Reality Mug 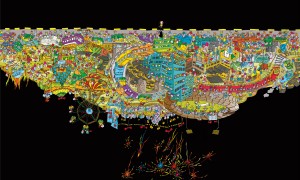 This is normally not the style of Philips, but they’ve scored definitely with this ad. Lovely prints to illustrate the effect of noise reducing headphones. Congratulations Mudra Communications for making this one. Click on the image to enlarge if yo